Alf had been thinking for a few days that he might be going on an adventure soon.  He had seen Thea take bags out to Beryl, their camper van.  When she took his bed out, Alfie knew they were definitely going away.  But he didn’t know where or for how long.   He thought it would probably be a for a few days or a week at most.
Alfie didn’t know at this point he was about to go on the biggest adventure of his life.
It was pouring with rain on the morning they headed off it so he only had a little walk.  He  wasn’t very pleased, but he was sure that he would get a better walk later, but he didn’t know where.
When Alfie and Thea first got in the van, they didn’t go far.  They only went just round the corner to say good-bye to Aflie’s best friend Leo and his second Mum and Dad.  When he got back in Beryl, Alf thought he might be there a while.  Now Alfie doesn’t mind car journeys but he does get a bit tired, so he snuggled up on the back seat and had a rest.  When he woke up they had stopped right where there was a special park that he could have a walk in.   After a little walk and a really good sniff.  Alfie liked nothing better than to have a really really good sniff.  It was quite possibly his favourite thing in the world, next to treats of course.

Thea said the next drive was only a short one, so he jumped into the front seat and looked out the window to see if he could figure out where they were going.  He saw a great big train, where they then drove on in Beryl.   Thea thought this was exciting, he wasn’t sure but decided it was OK.  Not as exciting as a big bag of treats of course.

The train took Thea, Alfie and Beryl the camper van under the channel all the way to France.   When they got off the train they only had to drive for half an hour before they got to a lovely campsite.   The first thing Alfie did when he jumped out of Beryl was to take a great big deep sniff – hmmmm – it smelt a little different, but quite nice, so he was happy.   Even better the sun was out, so after a little wander around the campsite, Alf settle down for a snooze in the sun.  Going on an adventure was areally quite tiring. 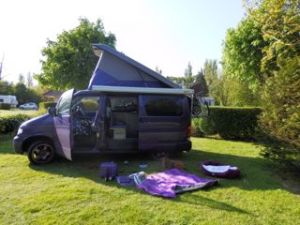 One thought on “Alfie goes on an adventure”