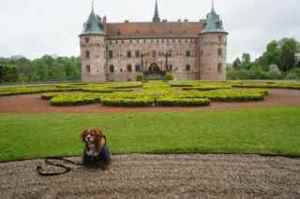 After leaving the farm in Weista, Germany and his friend Millie Alfie headed, with Thea & Beryls the purple Campervan of course, to Northern Germany.

The first place they stopped was called Lindeburg Heidi.  The campsite had a dog park outside the reception – with a dog house and water bowl as well as a parking sign.  Alf was very happy to have his own little house.

The campsite also had a little beach area with these funny seats.   What do you think Alf is thinking in this picture? 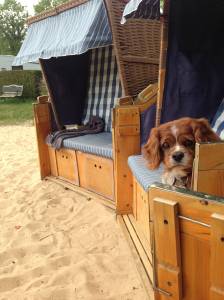 I think Alf was thinking ‘these chairs are  comfortable but I prefer my purple chair’.

The next day Alf and Thea went on a horse and cart ride around the common.  This is where the heather grows, it wasn’t in bloom yet but it was pretty anyway and fun to go on the horse and cart.   You can see Alf on the cart here and the horses that were pulling it.

After the ride they got on with their days drive – which was a very long one.   It took Beryl, Alf and Thea on a dirt track, the autobahn which is a very fast motorway and through the centre of Hamburg – a bit city.

By the time they reach their next stop which was in Plon by the lake they all needed a rest.  And they were lucky to have a great camping spot right by the lake.   There was a lot of rain overnight but not too much the next day so they decided to go on  trip across the lake in a boat in search of somewhere to have for lunch. 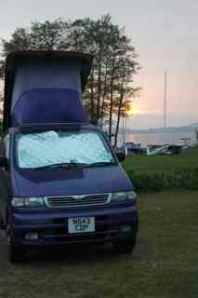 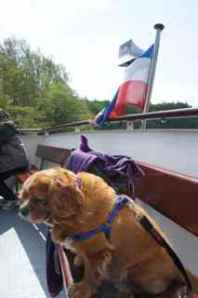 Alfie had a great big German sausage for his lunch.   This is him looking up at the sausage – whilst he was waiting for it to cool done. 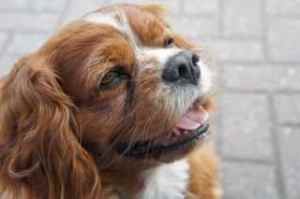 On the way back it looked like it was going to rain so Alf wore his rain coat.   As you can see from the picture he nearly had the top deck of the boat to himself – he just had to share it with Thea.

From Plon Alfie and Thea drove in Beryl to  Denmark.  That meant that Alf was leaving Europe and entering Scandinavia.  There are five main countries in Scandinavia – Denmark, Sweden and Norway, Iceland and Finland.  Alf was going to visit three of them on this travels.

It was very wet and windy in Denmark.  Alfie doesn’t really like the rain but it was OK because he could stay dry either by staying inside Beryl or by wearing his raincoat when he was outside.   They spent about a week in Denmark visiting castles.  The castles were all beautiful and very majestic.   Alf couldn’t go inside all of the castles but he had a good look and sniff around the gardens.

One of the castles also had a few exhibitions – with lots of cars and dolls.

Denmark is made up of three different main areas – Jutland which is the mainland and connected to Germany.  Then there are two islands; Funon and Zealand.   To get to these islands Alf and Thea had to drive across two big bridges.

When they were in Funon they stopped at a lovely campsite near a beach.  Alf quite liked the beach, but what he really liked doing was  eating the grass beside the beach. 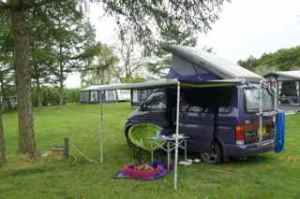 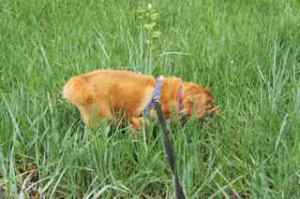 From the island of Zealand they had two choice of how to get to Sweden – they could either drive over a very high bridge or take a ferry.  They decided to take the ferry.  Can you spot Alf in Beryl on the Ferry??

When they got off the Ferry in Sweden it was unfortunately still a bit wet and windy.  But the views were beautiful, you could see for miles and miles – rolling green hills.   That night they camped by the beach again.  Alf ran around the beach like a puppy dog, he had a paddle, caught some sticks and then rolled in the sand.

When they got back to Beryl from the beach it was a little chilly – so Alf got all wrapped up in Thea’s poncho.  He doesn’t look very happy about it does he?  Do you think he looks better in the poncho or his rain coat? 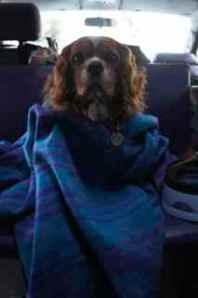 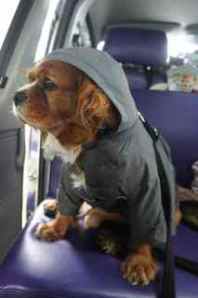 Whilst travelling around Sweden they took some time to explore the beach – can you spot Alf in the first picture having a look around? 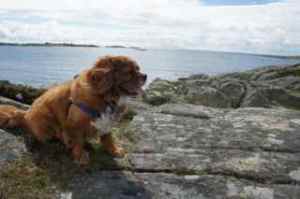 This is Alf on another beach in the sunset.   There were cows on the beach too, but luckily they didn’t mind sharing it with Alf.

Alf and Thea were a bit thirsty after their walk on the beach so they stopped for a drink.  Can you tell which is Alf’s drink and which one is Thea’s? 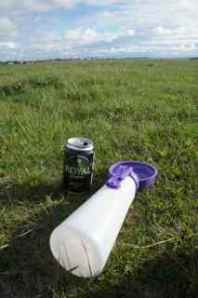 Another days drive and they arrived in Gothenburg, which is the second biggest city in Sweden.   When they were walking around town they saw a shop called Igor the Dog.  They had to go in and see if Igor was there – and he was.

A little later  they stopped for a drink and lunch and Alf met another friend.  There were lots of nice and friendly dogs in Gothenberg. 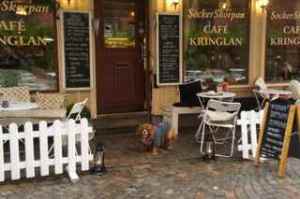 On this travel so far Alf has been on boats, trains and buses – and in Gothenberg he got to go on a tram too.

After a day in the City Thea and Alf jumped in Beryl and headed into the countryside.  Alf finds walking around a city tiring, so one day is enough.   Luckily when they got to their next stop it was sunny – so much so that Alf sat under the umbrella for shade.  Later he moved into the  shade of some pine trees and had a big sleep. 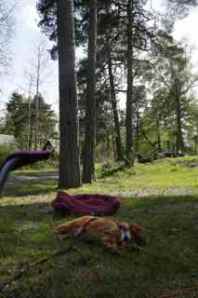 They only stayed in the forest campsite for one night before moving on to Lake Vanern – which is the largest fresh water lake in Sweden.

The weather was lovely and sunny so they stayed there for three nights.   At the lake Alf met some more friends.  As well as saying hello to his new friends he had some nice walks in the trees and played sticks on the beach.  Of course, he still found time to have a few naps in his favourite chair. 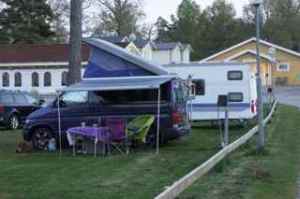 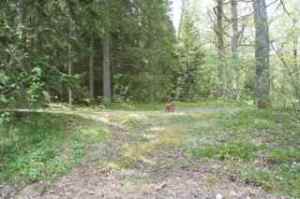 Their final stop in Sweden was on a very pretty campsite.

Now Alf doesn’t usually like walking on wooden decking, but he was very brave and walked all down the long path.   Until he had enough and then he just sat down and waited for The.  Alf was tired and wanted to go to bed.  He also thought it might rain, and wanted Thea to hurry up so they could get to bed before the rain started.

As usual Alf was right – it started raining about 5 minutes after they got inside Beryl.  There was a big thunder-storm that night.  The loud claps of thunder made Alf jump a few times.  Even though it made him jump he knew there was nothing to be really scared about so he soon went back to sleep.

The next day they got another ferry.  This ferry was going to take them all the way to Norway.  It had a special area for dogs, with cages for them to sit in.  Alf looked in and around the cages, but decided he much preferred the chairs.

Can you see the eyes on the big red truck that is parked just behind Beryl on the ferry? 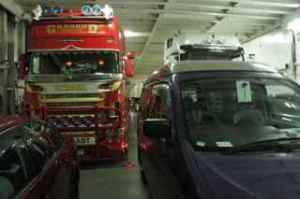 After a couple of hours on the ferry – they arrived in Norway.  The first thing they did was find somewhere that Alf could have a little walk and a wee.  He was very good and kept his legs crossed all the time they were on the ferry.

The campsite that night was right in the middle of the countryside there weren’t many people around and no other dogs.   But there was  a funny vehicle that Beryl parked next to – it looked a bit like a mini tank.

On their second day in Norway they had a big drive – probably the biggest of their trip yet.  They had to drive up the top of a mountain and then drive through snow across the mountain until they came down the other side.    To get down the other side they drove in a tunnel that was like a corkscrew – it was very strange.

As soon as they got out of the tunnel they stopped at the first campsite – where Alf met this mountain goat. 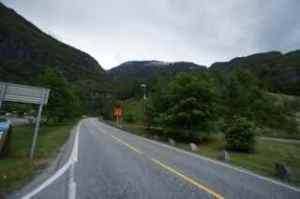 After meeting the goat, Alf could hear lots of noises and wanted to find out what was going on – so he stood up on the back seat to have a look.  There were trucks coming into park and fill up their pick ups with goods to take over the mountain – Alf watched them for ages – he was fascinated to see what they were doing.

The last few days had been a bit tiring so Alf and Thea stayed in their next stop for a few days.   It was in a place called Voss right on the edge of a lake, with mountains all around them.  It was the perfect place to relax for a few days.

Alf didn’t know it yet – but their next stop was to see some friends from England.