When we last left you Alf was in Amsterdam in the Netherlands, well since then he has been in Germany and Denmark which is in Scandinavia.

The first place Alf went to in Germany is Weista to stay on the farm which belongs to Joob and Antonius who are friends and relatives of Oma and Opa (Thea’s parents).   On the farm Alf met Millie Moo and fell firmly in love with her. 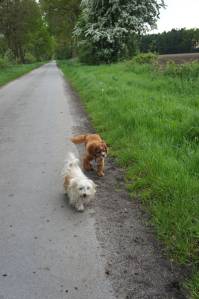 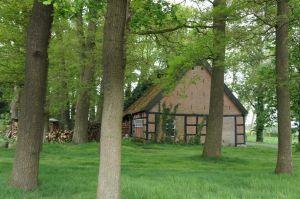 Whilst he was on the farm he got to meet some other animals too including sheep and cows. 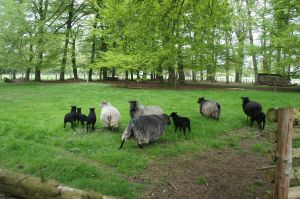 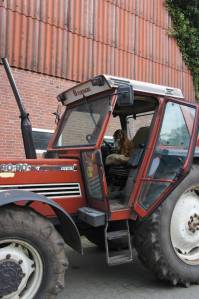 About 15 minutes walk from the farm house is a log cabin set by a lake.   Alf had great fun running there with Millie one day.  Thea rode the bike and Alf ran beside it – which he though was far better than getting inside the horrible trailer – if a bit tiring after a while.

In this picture you can see Joob pulling Alf up from the lake.  Joob and Thea though Alfie wanted to go for a swim – but in fact he had found some bones there from a BBQ and was trying to get hold of them.   He did get some and through they were absolutely delicious.

This is the farm house and if you look closely you can see Alf by the door looking out after Millie who is running out to see what Thea is doing.

Thea took Alf’s bed up stairs for him to sleep in but he took one look at the great big bed and decided that he was going to sleep in the bed instead.  It was extremely comfortable and once he got snuggled in there was no way he was moving. 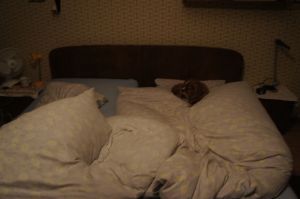 This cows had just been put in the field for the first time ever – that is why there are in the cage because they need to get used to it first.   Can you imagine what it must look and smell like  having lived inside the barn up until that point.   I bet they thought it was fantastic – if a little scary until they got used to it. 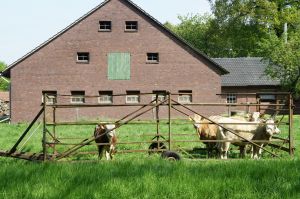 After a few days rest and exploring on the farm Alfie and Thea got back into Beryl and back on the road to continue their adventure.  They were heading up into the most northern part of Germany so they could get to Denmark.

The campsite they stopped in that night was in a place called Lindeburge Heidi.   Alf thought it was very cool because it had a parking spot just for him and his other doggie friends.   There was a house and drink there  – which Alf thought was a brilliant idea as he was a little bit thirsty.   Can you see instead of a parking sign for a car there is a parking sign for dogs – very cool. 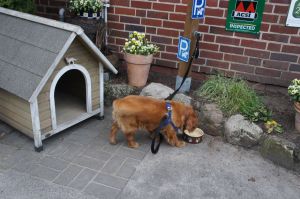 The campsite had a little beach bit with a funky chair in which Alf and Thea sat in for a bit. 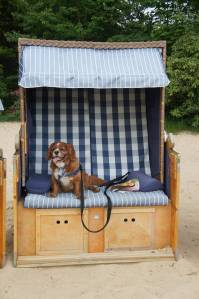 After that Alf was a little tired so he had a snooze. 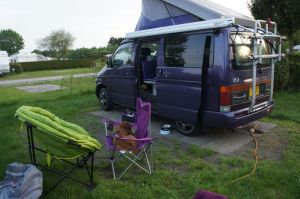 The next day they headed off into the heidi – which is the heather land – where heather grows.  Unfortunately the heather wasn’t in flower that day – it comes out in August and September.   But that didn’t stop Alfie having a ride in a horse and cart.

On the way back to Beryl the camper van they found this little pony.  Don’t you think she is pretty?

The next drive was a bit bumpy.  After driving on a small country road, the road changed from normal tarmac to a dirt road – which made the drive very very bumpy – which isn’t very good when you are in a camper van.

It wasn’t a very comfortable drive but it did mean they got to see these funny old Germany houses and barns.

After a very long drive they stopped in a place called Plon which was by a great big lake.  This meant Alf got to go on another boat trip – this time the boat was quite big. 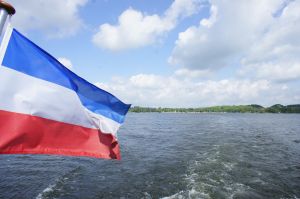 After the visit to Plon they headed into Denmark.  This meant that they leaving Europe and going into Scandinavia.    In Denmark they visited some castles.   On one of the visits it was raining so Alf had to put on his rain coat.  Do you like it?

At the first castle there was this beautiful peacock.  Aren’t the colours of his feather amazing.

The castle also have a collection of cars, bikes and dolls.   There was even a a camper van – not as special as Beryl the campervan but still a pretty cool camper van. 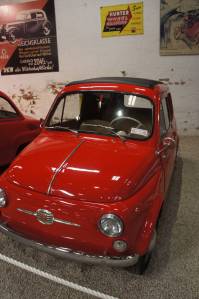 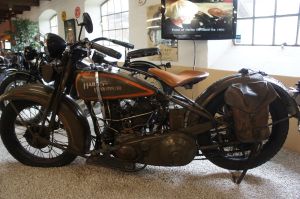 The campsite that night was by a beach – which Alfie got to explore.   He was a bit tired that day so they only went for a short walk – just long enough for Alf to taste the grass.   Alfie quite likes eating grass – not always but sometimes. 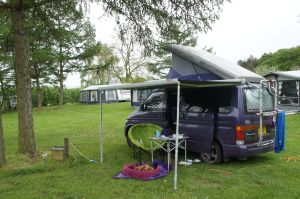 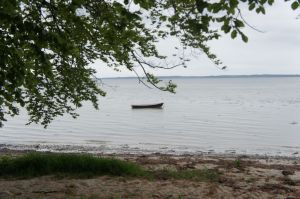 The next day they visited another castle – they don’t let dogs go into the castles so you can Alfie waiting here whilst Thea had a quick look inside. 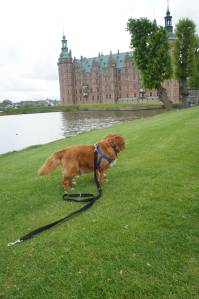 That’s it for now.  The next stop on Alfie’s adventure is to Sweden.  But before he goes Alfie thought you might like to see where he sleeps when they are in Beryl   He and Thea sleep in a tent on the roof of Beryl – it’s quite cosy.   Night night. 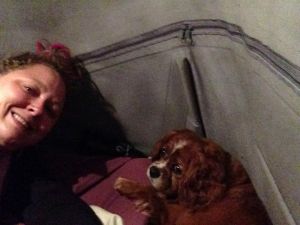